The Barra Track to Mitre Flats is excellent as that first, slightly more challenging family tramp. The tramp is just 15 minutes from Masterton at the end of Upper Waingawa Road; in the Tararuas.

Spectacular scenery and gourmet food – the Tora Coastal Walk has it all!

Ocean Beach is across Lake Onoke from Lake Ferry but can be accessed down Western Lake Road from Featherston in about 40 minutes and from Martinborough in about 50 minutes. This part of the coast is close to one of the world’s top ranked lodges at Wharekauhau Country Estate.

The Putangirua Pinnacles is one of the most incredible walks in the Wairarapa.

The Mt Holdsworth - Jumbo Circuit is a two to three day tramp to some of the best alpine tops travel in the Tararua Forest Park.

Totara Flats Hut is in a beautiful setting at the confluence of the Waiohine River and Totara Creek.

One of the most popular day trips in the park is the climb to Mountain House Shelter along the easy grade of the Gentle Annie Track.

The Tararua Range provides Wellington, Wairarapa, Horowhenua and Manawatu with an outstanding variety of tramping, hunting, rafting and walking opportunities in a wild, natural landscape. 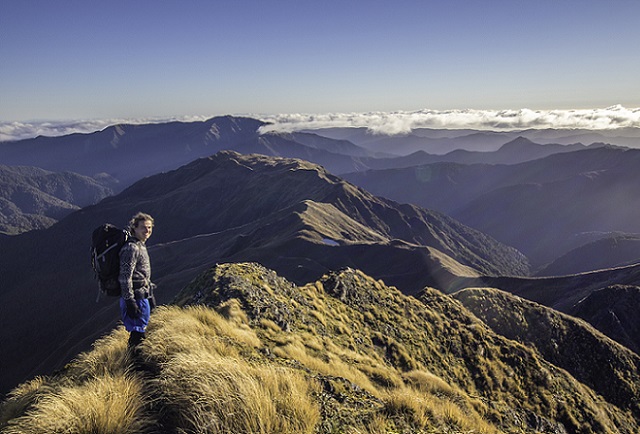 At 116,535 hectares the Tararua Forest Park is the largest conservation park managed by the Department of Conservation in the North Island.

The main entrance on the Wairarapa, eastern side, of the Tararua Range is Mount Holdsworth near Masterton. Waiohine Gorge near Carterton is another popular gateway to south eastern Tararua Forest Park. On the Kapiti Coast, western side, the entrance is at Otaki Forks where multi day tramps traverse the ranges and arrive in the Wairarapa.

MOUNTAIN ALERTS should always be checked here before departing on a tramp into the mountains.

Hut Tickets are essential for an overnight stay in a back country hut. Purchase your hut tickets and hut passes from the Masterton i-SITE Visitor Centre.

Topographical Maps of the back country are available at i-SITE Visitor Centres.

The main tramping routes in the Tararua Ranges are:

Gentle Annie Loop Track is one of the most popular day trips in the park. The east grade of the Gentle Annie Track climbs past the Rocky Lookout, through the heartland of Pig Flat to Mountain House Shelter before descending onto the Donnelly Flat Loop Track to enjoy an interesting round trip with a range of forest walking.

Totara Flats is in a beautiful setting at the confluence of the Waiohine River and Totara Creek. Take advantage of the excellent swimming hole right in front of the hut.

Powell Hut and Mount Holdsworth climbs through beech forest that markedly reduces in stature as the bushline and Powell Hut are approached (1,200 metres). Reaching the summit of Mount Holdsworth (1,470 metres) gives a real sense of achievement and well worth a photo.

Mount Holdsworth Jumbo Circuit is a two to three day tramp involving a climb through beech-podocarp forest to some of the best alpine tops in the Tararua Forest Park.

Mitre Flats on the Barra Track is an excellent first tramp for families.

Waiohine Gorge is the start of several touring tramps and is a good alternative start point for Totara Flats.