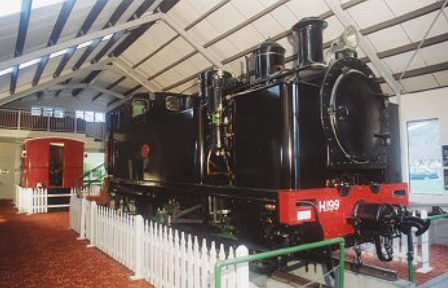 The Fell Locomotive Museum houses H199, the only locomotive of its type in the world and presents a unique aspect of New Zealand's railway heritage.

H199 is one of six engines designed for use on New Zealand's famous Remutaka Rail Trail. The locomotives climbed gradients as steep as 1 in 13 (7.7%) on the 4.8km railway between the settlements of Cross Creek, near Featherston, and Summit at the top of the Remutaka Ranges, in the Wairarapa. The Fell method of four grip wheels on a raised centre rail was used for added traction, with the centre rail also used for braking.

The fascinating history of the Remutaka Rail Trail and its Fell locomotives is recalled in the Featherston museum with photographs, models, memorabilia, films and an audio-visual presentation "Rimutaka 1949".

Remnants of the Remutaka Rail Trail can be seen at Cross Creek.  Maintenance pits, building foundations, turntable, bridges and tunnels feature along the length of what is one of several must do walking tracks and cycle trails forming part of the New Zealand Cycle Trail.