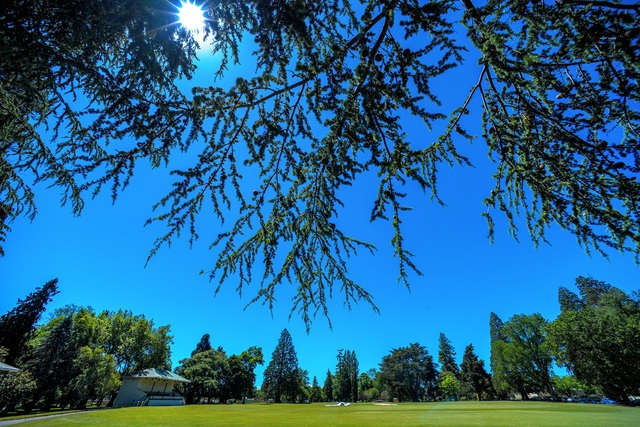 Queen Elizabeth Park’s collection of exotic trees is stunning, some planted more than 140 years ago. In total there is more than 180 specimen trees, ranging from the skyscraper American redwoods to the quirky Bhutan Pine. Download a map for the tree walk here.

Many of the trees are labelled with an arboreta sign which gives the botanical name, common name, geographical origin and date of cultivation, plus one or two other details of interest. In the case of the giant redwoods, Sequoiadendron giganteum, it is simply the “Big Tree”, one of the world’s largest and oldest trees.

The first planting of exotic trees at the park was done in the 1870s. North American conifers were all the rage at the time and feature prominently, in particularly the redwoods which are planted along many of the boundaries and contribute much to the character of the park.

In the area bound by the lake, the cricket oval and the Coronation Hall are a number of interesting trees, including a Himalayan member of the pine family, Pinus wallichiana.

Closer to the Lake of Remembrance is another large Asian conifer, Ginkgo biloba, unusual for being deciduous and having most unconifer-like foliage, the leaves being light green and fan-shaped, with two lobes, as the name suggests.

Along the pathway to the lake from the croquet green stands the remains of a 1940s attempt to make Masterton the flowering apple capital of New Zealand. The Beautifying Society planted crabs in some of Masterton’s streets while an avenue was planted in the park.

Behind the grandstand are two of the largest deciduous trees in Masterton. A large London Plane shows off its remarkably mottled bark as it exfoliates, the bark being multi-coloured. Alongside it is a towering Tree of Heaven, Ailanthus alitissima.

A walk through the park will allow you to find a native celery pine, a white-flowered Campbell’s magnolia, an evergreen oak (complete with tiny acorns) elms, oaks, limes, cherries, rhododendrons, camellias – trees galore in fact.